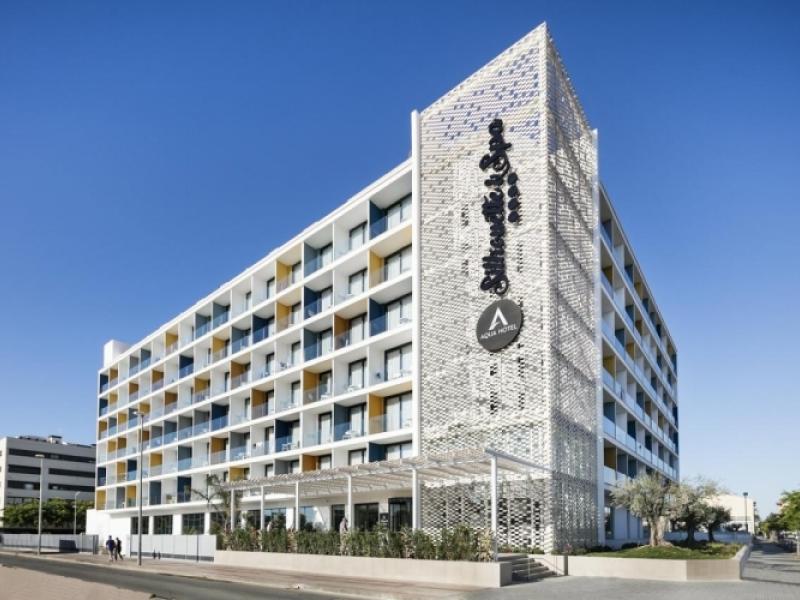 The Aqua Silhouette Hotel in Malgrat de Mar (Spain) has been improved, both the exterior and interior, after the Estudi Isern Associats team has undertaken an integral restoration project of which SELLEX has taken part. Several rooms of the new facilities have been equipped with the multifunctional FAST Table designed by Carlos Tíscar.

Undoubtedly the renovation and extension of the building is a clear example of architectural recycling, very necessary in this case. The Aqua Silhouette Hotel Complex located in the coast of Barcelona, was built in the 70s coinciding with the tourism boom that led to rushed constructions. This 300 bedroom hotel had an inefficient façade and out of date installations that shouted "restore or die". And the team of the hotel opted for the first one with very good results.

The complex renovation works have been undertaken in only 6 months. A record time taking into account the scope of the project, as it was not only a matter of design but also the building had to be adapted to the new regulations in force.

To replace the old façade in pink colour, a new one has been designed having "simplicity" as the alma mater. For this, the architects of the project have opted for a ceramic blind made of flex brick placed both in the main entrance and in the terraces.  The pattern was incorporated to define the whole of the façade, using each room as an element that is repeated and to which some colour was added to break the homogeneity that such a repetition could create.

The same colour palette has been used to design the bedrooms. Moreover, all the public areas have been transformed by adding a new spa, bar, restaurant and lobby.

The new building has also multipurpose spaces to host all type of events. It is precisely these areas that have been equipped with the FAST Table, designed by Carlos Tíscar for SELLEX. Its multifunctional design makes it the best option for this type of rooms that do not always need the same number of tables and chairs. The FAST multifunctional table has a very comfortable system with a single frame and different tops, allowing multiple table configurations, each one for each occasion. Specifically, the FAST Table model chosen was the one with 140x60 cm top, in white colour, which was distributed in the different multipurpose hotel rooms. Rooms that undoubtedly will optimise space to the maximum thanks to this multifunctional table system, removable and combinable with tops of other dimensions.