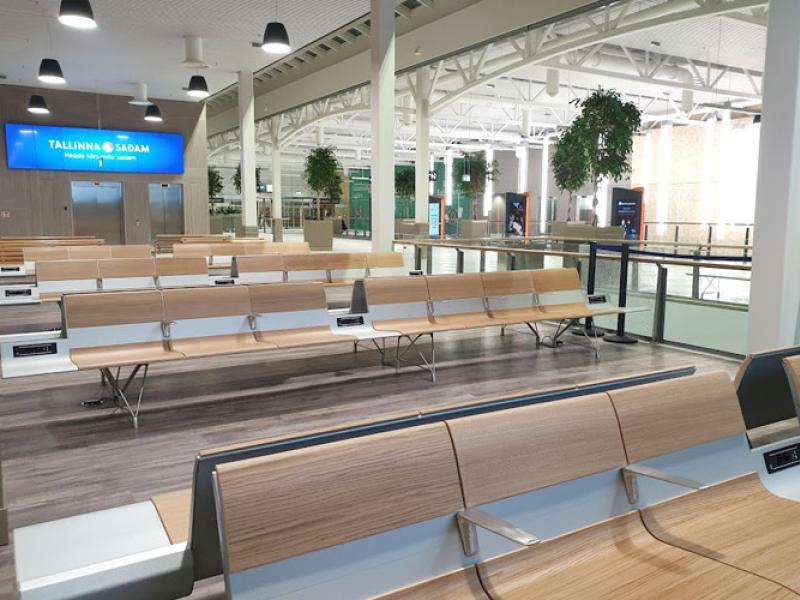 A few months ago, SELLEX incorporated the Electrification System to one of our most emblematic Passenger Terminal seating, the AERO Bench, designed by Lievore Altherr Molina. This new AERO Bench version has been chosen by the Tallinn Maritime Station in Estonia, where nearly one hundred benches with electrification have been installed.

Specifically, they are seats from 3 to 8 seaters and, in some cases, accessories such as armrests and/or tables have been added.

These AERO Benches with Electrification have been distributed in facilities that now have more "bright and modern" spaces, thanks to the materials used, such as natural wood. This is how Peeter Nõgu, one of the people responsible for the project explains it. AERO Bench with Electrification in the Tallinn Maritime Station

Both the interior design and the project to rebuild the terminal were in charge of R-Konsult Architecture Studio. Led by the architect Irina Rau, the studio sought to "create a positive atmosphere", through the aerodynamic facades in different colours and the clear architectural volumes.

Around 17 million euros have been invested in the reconstruction of this terminal, considered the largest maritime and touristic gateway in Estonia, and it has been co-financed by the European Union under the Connecting Europe Facility (CEF).

After almost two decades of equipping large facilities all over the world (airports, passenger terminals, funeral homes, hospitals, palaces of justice, auditoriums, etc.), it was time to renew the AERO Bench and offer new functionalities.

That's why we decided to develop an Electrification System for the AERO Bench which, by offering the availability of both plug connections and USB sockets, would make the usual waiting time in these spaces more bearable.

The Electrification System is completely integrated into the seat structure, so that the cables go through the interior of the seat and the legs.

Likewise, the Electrification is located in an elevated position of the bench on a curved table specifically designed to prevent any drinks from spilling and damaging the system.