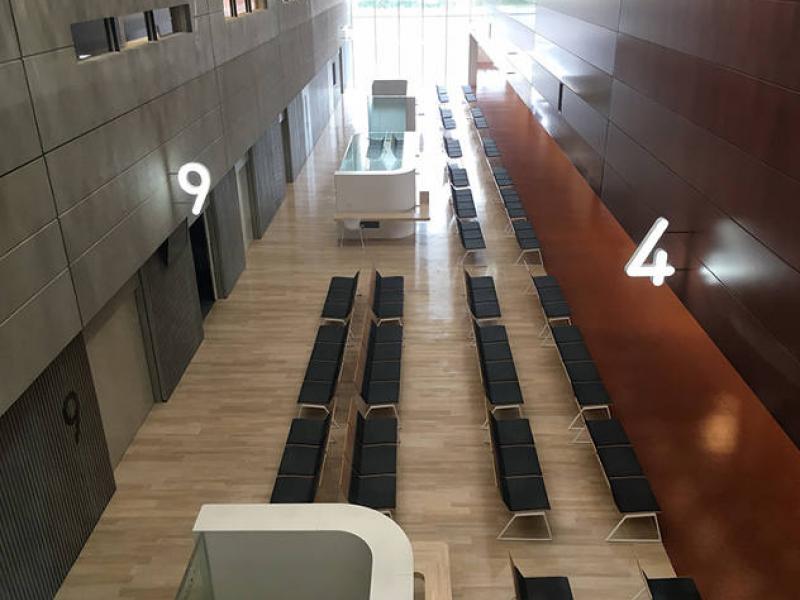 Almost 200 BILDU Benches, designed by Mario Ruiz, equip the waiting rooms of Tachikawa General Hospital in Tokyo (Japan). The majority of them are 3 seater upholstery and oak benches, but 4 seater benches and some of 2 seaters also can be found.

The Tachikawa General Hospital construction finished in August 2016. The project involved the relocation of an advanced healthcare hospital reinterpreting in a modern way the original architecture of the existing building. The 37,796 m2 facility will serve as a model for surrounding regional hospitals.

Takenaka Corporation, one of the big five general contractors in Japan and the oldest one, was in charge of the architectural design and the construction of the hospital. The installation was divided into two buildings that were aligned along a central axis that penetrated the constructions from east to west, between the patient ward and the clinic facilities. These areas were clearly divided by color-coding, for example the east mountain side (green) and the west river side (blue).

With the aim of acquiring a building image that responded to the rich natural surroundings, three colour panels were incorporated. In this way, the typical colours of fertile earth and chalybeate groundwater of Nagaoka, were randomly combined at the exterior of the hospital. The common concept of interior architecture was thaw, a sign that springs after a long winter in snowy Nagaoka. Some of the interior signs were internally illuminated, expressing the image of a snowball that glows white and softly in the sun.

Natural light enters from the skylight ceiling and the interiors are filled with bright and gentle light so people could feel the the passing of time and changing of the seasons throughout the day and night. Natural light and artificial light were naturally combined to create an impression of melting snow.

BILDU Bench was chosen to equip the waiting rooms of the hospital because it suited perfectly the interior design. Moreover, the dimensions and the ergonomic design of BILDU allowed a comfortable stay while seated, which is really apreciated in this type of health installations.

We are really honoured to have participated in this project full of meaning and symbolism.