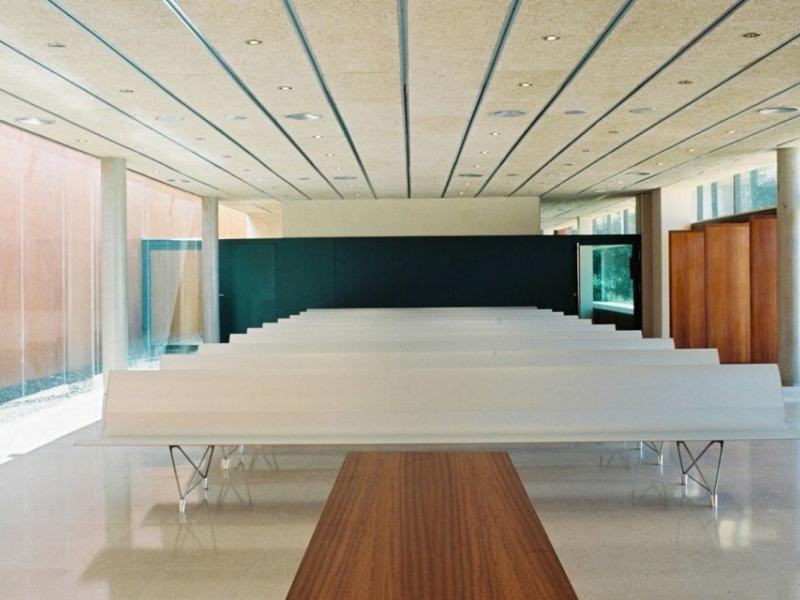 The Argentona Cemetery in the province of Barcelona has a chapel that has been equipped with the AERO Selfstanding Bench, designed by Lievore Altherr Molina for SELLEX.

This is the municipal cemetery of the Catalan town, whose project was led by the ae5 arquitectes studio and awarded the First Triennial Prize for Architecture of Maresme 2001-2003.

The most remarkable thing about this cemetery is its abundant vegetation as it has 2,300 square meters of garden areas that can be felt from inside the facility.

The service building has wake rooms, a chapel and other funeral services. It is a simple building, with hardly any ornamentation, and functional that opens to the outside through large windows through which the light from the courtyard enters and from where you can access to the forest.

The simple and sober style is also appreciated in the islands of niches that are distributed throughout the cemetery compound. They do not have great height and their ornaments are traditional. The northeast corner is dedicated columbariums for ashes.

Seats for the funeral service

The tribute to our deceased may vary according to the beliefs of each one, that is why the spaces dedicated to the funeral cult must be neutral in order to host any ritual. This means that the furniture must also be able to adapt to all kinds of beliefs, something that we are very aware of at SELLEX.

For that reason, we have beams and benches that meet the needs of funeral homes and wakes. The AERO Bench is one of those seats that, due to its aesthetics, fits perfectly in this type of facility, offering the possibility of forming compositions from 2 to 7 seats, as well as choosing between different finishes.

AERO Bench in the chapel of the Argentona Cemetery

The VACANTE Bench is also present in numerous chapels and wakes, with a design that in some of its versions is reminiscent of traditional wooden church benches, but with a more modern touch. In this bench designed by Enric Miralles highlights the possibility of including a recliner as an accessory. It also has an absolute modularity, which allows to create compositions from 2 seats to infinite.

AERO and VACANTE are just two of the options that we offer as seats for funeral homes and wakes, but we have other benches that can be used in facilities such as that of the Argentona Cemetery. We invite you to discover them by clicking here.