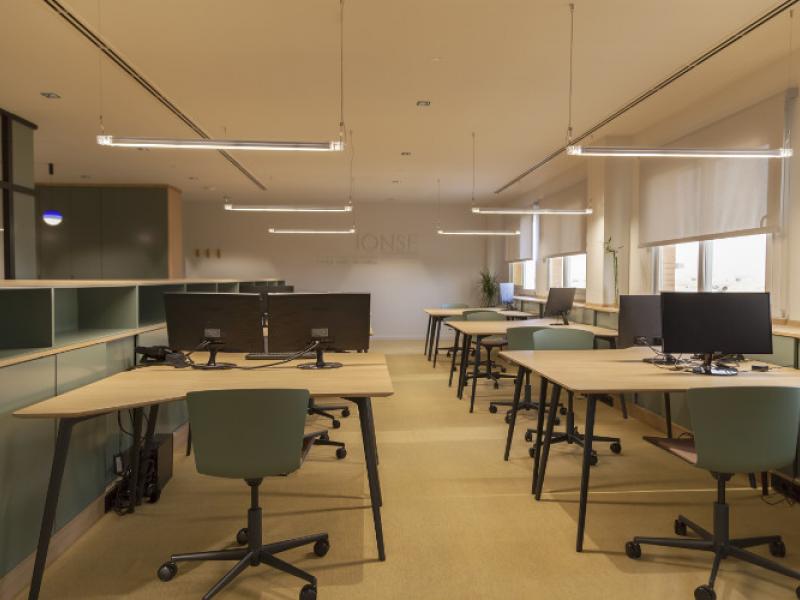 The company IONSE has chosen SELLEX tables, stools and chairs to refurbish its offices in Seville (Spain), and has done so following its own essence and work philosophy. This is a company specialising in energy efficiency that seeks to improve the energy performance of facilities through the use of renewable energies, thus helping to build a more sustainable world where energy dependence on non-renewable resources is increasingly less.

This is why they sought a sustainable refurbishment for their new offices, something they have achieved thanks to the excellent interior design project led by Estudio Flop. Pedro Abbad, one of its managers, tells us that they have focused above all on achieving "visual comfort" through organic colours and warm lights, but also "acoustic comfort", to improve working conditions in the office.

The materials chosen allow for this acoustic and visual comfort, but also help to reflect in some way the company's imprint: they are recycled or recyclable materials, with a low carbon footprint and manufactured using sustainable processes.

Another aspect that has been kept in mind when approaching the project is Ionsé's own internal functioning: horizontal, open and flexible. The company also has external agents, which meant that the spaces had to be sufficiently versatile.

This is how Estudio Flop decided to organise the office around a central work space, supported by a large filing cabinet, to which two management offices, a boardroom and an office are connected. The workstations are located on the perimeter of the office, which makes it possible to take advantage of the pleasant climate of Seville to work with the windows open and produce cross ventilation.

For the refurbishment of the facilities, Estudio Flop has relied on different seating and office tables from SELLEX, as they say "because they meet the criteria of sustainability" that Ionsé advocates, but also because of their "adaptability", as they allow working in any of the spaces, even in the office.

In this case, three models of office tables have been chosen: the FLY Table, designed by Lievore Altherr Molina, of which 15 units have been installed in different formats (Individual Table with Wing, Individual Table with Wing and Buck and Oval Meeting Table); the oval-shaped MIX Side Table and finally two PLANC Round Tables, also designed by Lievore Altherr Molina.

As for the office chairs, SLAM (Lievore Altherr Molina) is the model that predominates in the new facilities, with more than 25 units in its SLAM with wheels and SLAM skate versions that have been distributed throughout the different work areas. Two TAYLOR Chairs with arms (Lievore Altherr Molina) and a dozen HANDY Stools, designed by Stephen Philips - Arup, have also been installed. The latter model stands out for its versatility in collaborative work spaces, as it can be used as a seat or as a side table. Moreover, as it can be stackable up to 20 units, it allows to optimize the space to the maximum.

From SELLEX we have to thank Estudio Flop for the trust they have placed in our office designs, as they say for the "quality and seriousness that characterises them".  Undoubtedly, the honour is ours for having been able to be part of a project like this in which sustainability, design and practicality are combined.