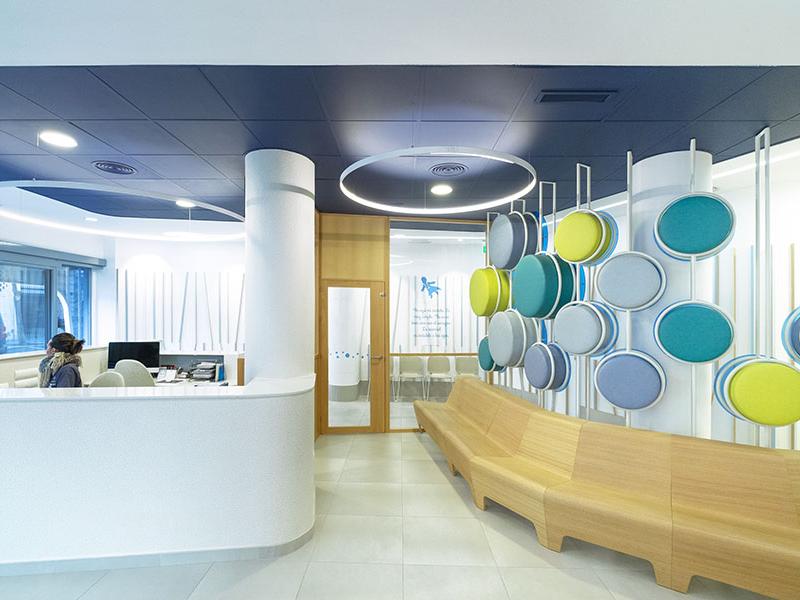 Blue ceilings, light rings and cylindrical poufs. Such are the waiting rooms of the new Unittas Clinic in Chiclana (Spain), which has a design inspired by the book “The Little Prince”. An interior design proposal that comes from the hand of Estudio EEBA that saw in the metaphors of the story a space that could be aimed to both children and adults, since the clinic wants to aim both profiles.

Touring the new installation is almost like stepping into the skin of the protagonist of "The Little Prince" and traveling through the same universe. From the façade itself, which is reminiscent of a hangar or the helm of an airplane, to the interior, where a large 40-meter "boa of light" runs through the ceiling and where the lining of the accesses to the consultations has slats that evoke the "virgin forest". Each element leads us to this book that every child has read at some point. Back Modular Seating at the Unittas Clinic in Chiclana (Photography: Javier Reina)

Even the furniture fits into this entire children's universe. The BACK Modular Seating program, designed by Burkhard Vogtherr for SELLEX, has been chosen to condition this dreamlike installation because “it adapts to the organic shapes of the project”. This is how Pedro Asencio, from Estudio EEBA, explains it, who assures us that BACK “offered what they wanted”, due to the robustness of the wood veneer and its natural finish that fitted perfectly with the rest of the project materials. "The piece had to be sculptural with a careful design, both on the front and the back, since it would occupy a central place in the space”, adds Asencio.

BACK Modular Seating is a new concept of modular waiting bench that allows several compositions: linear, zigzagging, curved ... and a long etcetera. It is the bench of the thousand and one shapes. For the design of the modular bench that has been installed in the waiting room of the Unittas Clinic of Chiclana, modules A2, B1, C1 and D1 have been combined in natural oak and with grey legs.

Unittas Paediatric Centres have been increasing their services. They have a centre in San Fernando, where they pay exclusive attention to paediatric patients. But in their new centre in Chiclana de la Frontera they offer full care to all members of the family, highlighting the existence of two well differentiated areas: a Paediatric Area and a Specialties zone.

Hence, they saw the need to move to a larger space of 261 m² where they can offer all their services with full guarantee and in an environment in which the patient, both children and adults, feels comfortable. Something that has undoubtedly been achieved thanks to the original design concept of Estudio EEBA.