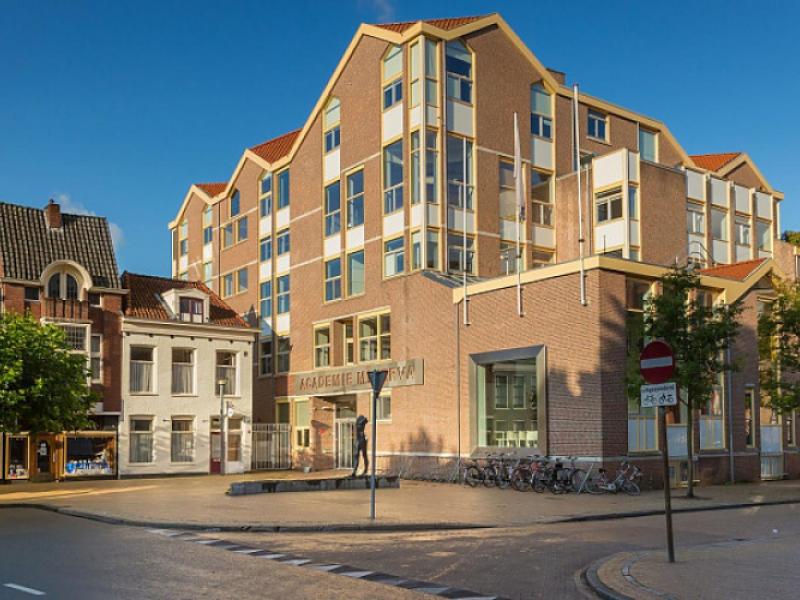 In 1797 six citizens of Groningen (The Netherlands) took the initiative to found a school of Drawing, Construction and Navigation. A year later the first classes were already being taught. Since then the educational centre has evolved into the current Minerva Academy of Art, as part of the Hanze University of Applied Sciences.

The Minerva Academy occupies a building that was designed by Piet Blom (1934-1999), a Dutch architect known for projects such as the Cube Houses in Helmond and Rotterdam, as well as for being closely linked to structuralism, an architectural movement that is somehow reflected in Minerva. The artist has a museum in honour of his works that was inaugurated in the municipality of Hengelo shortly after his death, something that highlights the prestige of the architect.

The Minerva Academy that Blom proposed consists of four building parts distributed around a square space that is seven meters above ground level. Blom's plan was to make this square completely public, but it was finally decided to close the accesses to avoid damage.

A multifunctional seat for a multipurpose building

It's hard not to get lost in the Minerva School of Art due to the enormous variety of spaces. It contains around 150 rooms, many of which are multipurpose, and that's where multifunctional furniture comes into play. To furnish these spaces, the SLAM Chair, designed by Lievore Altherr Molina for SELLEX, has been chosen in different versions and with different finishes. In this way, we find this multifunctional chair in black and white, both with and without armrests. The SLAM Chair in one of the multipurpose rooms of the Minerva Academy of Art
Specifically, the 275 chairs that have been installed occupy two Minerva spaces: on the one hand, a multipurpose room where the school's students can work in groups and consult on the computer, and on the other, a room for organization of talks and presentations.
The SLAM Chairs program, within its wide variety of possibilities, has some models that can be stacked up to 8 units. This makes the SLAM Chair a good choice for this type of multipurpose space where the same number of chairs and tables are not always required. In addition, there is the possibility of acquiring a trolley to easily transport the stacked chairs so that the optimization of space is much greater.
And all this accompanied by a unique design that adds style to the room and fits perfectly with the space. Because practicality is not at odds with design.
Contact