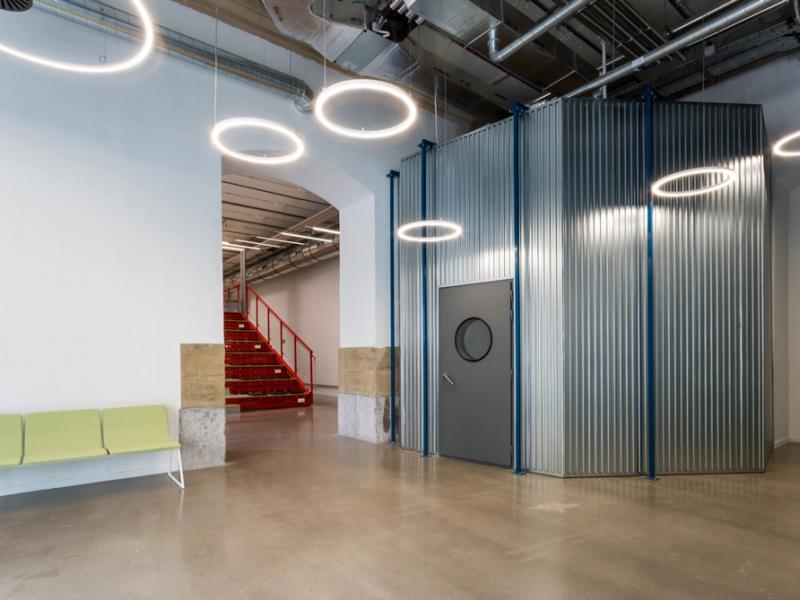 2deo is the audiovisual laboratory of Tabakalera, the old tobacco factory in San Sebastián (Spain) that in 2015 opened its doors converted into an International Center for Contemporary Culture. Specifically, 2deo was born a few years later with the aim of invigorating the audiovisual sector in Basque language, promoting new contexts of creation and experimenting with new models and production formats.

The laboratory has spaces for both training and co-working and also edition rooms and areas where the different projects can be exhibited.

It is precisely in these rooms (where different works can be projected) where SELLEX seats have been installed, specifically the BILDU Bench, designed by Mario Ruiz. It is a modular seating system that allows one, two, three and four-seater compositions to be made; and five and six with three legs. Furthermore, arms or tables of different formats (side, corner or extension) can be added to aforementioned compositions. And it is important to mention that we can customize them as we like by choosing the finish of the seat: natural wood, stained or upholstered.

For this installation, the TGA interior design team has opted for seats of different sizes. This is how throughout the building we find the BILDU Bench in its 2, 3 and 5-seater versions. All of them without arms or tables, with white frame and the seat upholstered in apple green. The BILDU Bench in the modern audiovisual laboratory of Tabakalera

The BILDU Bench is really a seat that is usually used as a waiting seat in different facilities (hospitals, terminals, offices...). For this reason, in 2deo some of the compositions have also been placed in waiting areas.

Given these data, 2deo works every day to energize the audiovisual ecosystem in Basque language. For this, it has 500 square meters of space in which all kinds of activities are carried out and which serves as a meeting point between audiovisual creators and citizens.