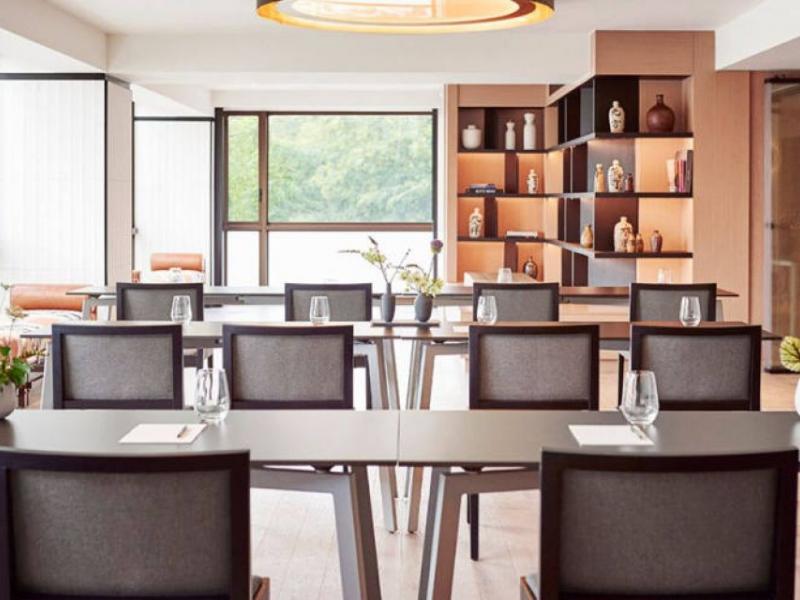 The Nobu Hotel in Barcelona has chosen the FAST Table, designed by Carlos Tíscar for SELLEX, to furnish its facilities. In this way, one of our most versatile tables occupies some of the hotel's multipurpose spaces. Specifically, around a hundred tables with different dimensions have been installed, all in a grey / black compact finish, and as accessories 4 trolleys to transport them.

FAST is one of the tables most chosen by hotels and other facilities with multipurpose spaces, where it is necessary to modify the furniture depending on the event and the number of expected guests.

This table presents an innovative system that allows combining a single frame with different countertops, giving rise to multiple table configurations with a single stock. In addition, it has an added advantage: no tools are required for its assembly and wheels can be incorporated to easily move it from one place to another. Thus it is perfect to optimize the space. FAST folding table at the Nobu Hotel in Barcelona

The first Nobu Hotel in Barcelona is the third that the hotel chain opens in Spain (it has two others in Ibiza and Marbella respectively). The one in Barcelona is located in a building on Roma Avenue, opposite Sants Station, a privileged place that is very close to the Exhibition Center.

The interior design of the building is made by Rockwell Group, a studio that has already signed other works for the group, all of them with that characteristic Japanese minimalism. The Hotel Nobu in Barcelona presents an avant-garde design inspired by the Japanese style that is evident along its more than 20 floors in height and its nearly 260 rooms.

However, the building also hints at the inspiration of Catalan modernism that is intelligently mixed with typical elements of the Japanese culture: traditional techniques such as the Kintsugi, flower arrangements, neutral tones and many small details in each room that allow us travel to Japan without leaving Barcelona.

Stone and wood are the most present materials and those in charge of bringing elegance and warmth at the same time in all rooms of the hotel. The solid wood of almost all the furniture in the rooms and even in the bathrooms stands out, where the bathtubs are lined with wooden panels simulating the atmosphere of the onsen.

The restaurant is another of the key points. Located on the 23rd floor, it offers spectacular 360º views. In this case, the inspiration for the decoration is rather Mediterranean, with the city and the sea in the background. The Hotel Nobu has installed the FAST folding table

As anecdotal data, it must be said that the actor Robert de Niro is one of the founding partners of the Nobu Hospitality hotel chain that, in order to open this hotel, has partnered with another Spanish hotel group, Selenta Group.

The other two partners of the American actor are Chef Nobu Matsuhisa and film producer Meir Teper.