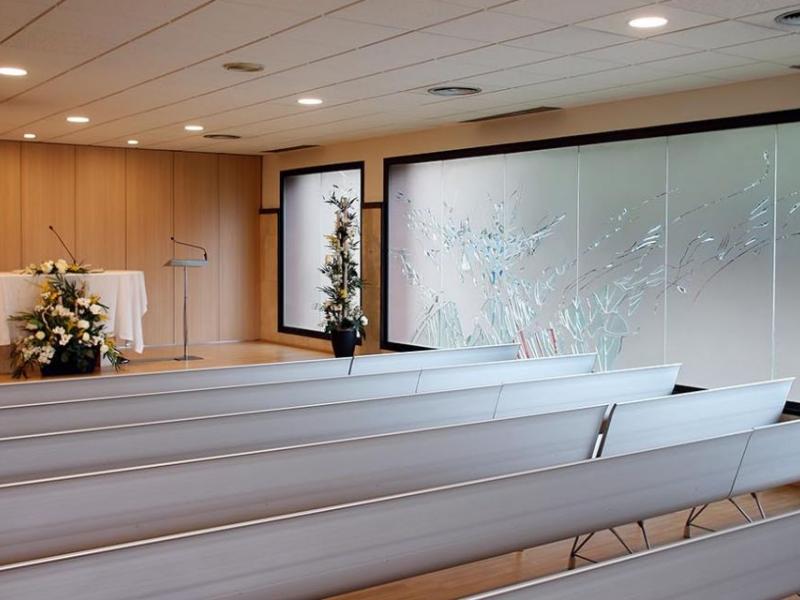 The oratories of the Collserola Funeral Home in Barcelona (Spain) are equipped with the selfstanding AERO Bench designed by Lievore Altherr Molina for SELLEX.

The funeral home itself has a long history. It was built and inaugurated in the 80's; In 2009, a major remodelling was undertaken and years after those reform works, the AERO Benches were incorporated into its facilities. The two models chosen were the 3-seater bench and the 6-seater bench, both in aluminium, and all of them were placed in the oratories of the funeral home.

The funeral home, belonging to the Mémora Funeral Services Group, is located in an incomparable setting such as the Collserola Natural Park, a natural environment of more than 6,500 hectares of Mediterranean vegetation. This privileged location transmits tranquillity and harmony and gives the funeral home its own uniqueness that other funeral homes in the area do not have.

In addition, the Collserola Funeral Home can boast of being the only Funeral Park in and around Barcelona, ā€‹ā€‹since the services of a funeral home, crematorium and cemetery are offered in the same place. The enclosure has 22 wake rooms, a crematorium, two oratories (a large one with capacity for 500 people and a smaller one for 100), parking, cafeteria-restaurant and flower shop. The Mémora Group has always shown its commitment to sustainability. This is how in 2002 they started the incorporation of a smoke filtration plant in the Crematorium of Collserola for the elimination of dioxins. It is a pioneering installation that was then the first in Spain. The filter, with a self-cleaning system, started operating in March 2003, allowing the emission to be reduced by 11.5 points compared to the maximum figure prescribed by the authorities.

This service allows the realization of so-called eco-funerals, an increasingly widespread trend in the funeral sector. The eco-funerals aim to reduce greenhouse gases by a minimum of 30%, as well as emissions of dioxins and gases toxic to human health.

In addition to filtration systems like the one mentioned above, there are another series of actions that make a funeral respectful with the environment: coffins made of certified wood and without toxic varnishes, biodegradable urns, use of flowers from organic crops, reminders with recycled paper , transportation of the deceased in combined vehicles, etc.

This is not the first time that SELLEX and the Mémora Group have worked together on the same project. Other Mémora funeral homes have already relied on SELLEX funeral and wake seats. This is the case of the Reus Funeral Home, Roses or Sancho Dávila, among others that have the AERO bench in their facilities.

For their part, the Hospitalet and Torroella de Montgri funeral homes opted for the VACANTE Bench, a seat that is usually in high demand in this type of facility. The possibility of incorporating a kneeler as an accessory makes VACANTE a perfect fit in chapels, churches and wakes. Not to mention its robustness, a feature it shares with the AERO Bench.